Archie Mega Man Issue 001, or simply referred to as Mega Man #001, is the first issue in the Mega Man comic series published by Archie Comics. It was released on May 4, 2011 and was re-released again for Free Comic Book Day a year later on May 5, 2012.

"Let the Games Begin!" Part One: The future looks bright when brilliant and benevolent Dr. Light unveils his latest creations: the Robot Masters! But when the nefarious Dr. Wily steals them for his own sinister purposes, there is no one left to stop him. No one — except Mega Man! Don't miss the first issue of this brand new ongoing series!

The issue begins with Mega Man about to enter Dr. Wily's castle. While approaching the castle he tries to avoid Big Eye Robots as they are about to attack him. Mega Man notices the entrance to the castle is missing a door, so he uses his Super Arm to make himself one and destroys two Big Eyes in the process. Inside Wily's Castle, Mega Man is attacked by the Yellow Devil, and as they prepare to fight Mega Man wonders how things came to the current situation.

The story then cuts to the beginning, with Rock and Roll helping Dr. Thomas Light prepare his speech for a major unveiling from Light Labs. Dr. Wily appears backstage, demanding that Dr. Light allow Wily to give the speech alongside him. Dr. Light declines, causing Wily to react a bit more hostile. As Dr. Light heads towards the stage Wily begins plotting.

Dr. Light begins his speech and unveils the Robot Masters: Cut Man, Guts Man, Ice Man, Bomb Man, Fire Man, and Elec Man, and Light explains the purpose for each one and how they will help mankind. Later that night, Wily sneaks into Light's lab to reprogram and steal the Robot Masters.

In the morning Roll wakes up Dr. Light telling him the Robot Masters have gone missing. They turn on the news and find that the Robot Masters are attacking the city. The broadcast is interrupted when Dr. Wily takes over the airwaves and demands everyone to surrender to him. Feeling hopeless, Dr. Light sulks in regret. Rock, feeling like he has to do something, asks light to convert him into a battle robot. Reluctant but proud, Dr. Light starts to convert Rock into a fighting robot. Light creates armor, a special chip that allows Rock to copy the abilities of the Robot Masters, and an arm cannon he names the Mega Buster. Upon hearing the name of the Mega Buster, Rock's new weapon, he decides to name himself Mega Man.

While Dr. Light is upgrading Rock into a super fighting robot, and after finishing Rock is given an awful appearance. Mega Man then gives the comic's address and asks readers to send in letters about what they thought think of the series. 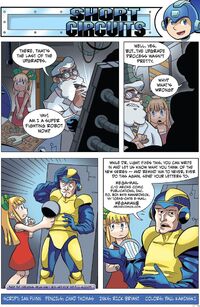 Raw Sketch of the Variant Cover

Page Five
Add a photo to this gallery
Mega Man Comics
Retrieved from "https://blue-bomber-comics.fandom.com/wiki/Archie_Mega_Man_Issue_001?oldid=6874"
Community content is available under CC-BY-SA unless otherwise noted.