Archie Mega Man Issue 002, or simply referred to as Mega Man #002, is the second issue in the Mega Man comic series published by Archie Comics. Continuing as Part two of the Let the Games Begin story arc, Rock Light, under the Mega Man alas, is beginning to stop the Robot Masters which were hacked by Dr. Wily as they were programmed to attack the city. The Issue was released on June 6, 2011.

"Let the Games Begin!" Part Two: Rock was just a simple helper-robot. Now he's the world-saving Mega Man! Armed with only his Mega Buster, can Mega Man face down the Robot Masters? More importantly, can he face his own reservations about fighting his own kind?

At Downtown Mega City, two solders are hiding behind an overturned vehicle as they were questioning if someone can stop the Robot Masters. Eventually Mega Man comes into the scene and he was talking with Dr. Light about what to do with the Robot Masters. Light is checking on the designs along with the locations of the Robot Masters and he recommends Mega Man to disable Bomb Man first. While Mega Man was having a conversations, the soilders wondered that Mega Man is fighting agains the Robot Masters, even another soldier thinks he's miss understood. Mega Man wonders what the soldiers are talking about so he said "hello" and tell them that he's here to save everyone.

While trying to find a Bomb Man, he endcounters flee-like robots that are begining to injure him although thses are one of the robots that Mega Man may fight and at points. destroy them. He eventual stopped them however, he dodges a laser attack from a possible Sniper Joe Robot that is also attacking them though Roll wondered at first it was Proto Man or Blues. Light finds Bomb Man's location at an excavation site and Mega Man goes into the site.

He finds Bomb Man, while Bomb Man asks if hes the one who works at Light Labs. Mega Man says that its him but Bomb Man begins to throw bombs at him. While trying to dodge the bombs, He fires his laster using his Mega Buster and Bomb Man is destroyed, but after that, he feels sorry for what he did. Dr. Light then orders Mega Man to touch hm and then the copy chip then copies one of Bomb Man's weapons which is duplicating hyber bombs, though he can only use one weapon at a time instead of the Mega Buster. Dr. Light later hopes that he can repair and reprogram the Robot Masters soon. He then gets teleported to a Quarry where Guts Man is currently located (at which like other Robots Masters, they have a command signal to direct other Robots). While looking for Guts man, he sees a met but that lead to an ambush along with a Mettaur invasion.

While finding Guts Man, he finds another Robot worker who begins to attack Mega Man since Dr. Wily also secures and reprograms the robots in the captured area. He continues to talk with Dr. Light but he loses signal by the time he goes underground where he sees Guts Man. Guts Man then puches him towars the ground and Mega Man tries to stop him using his Mega Buster which didn't work, and instead he uses his Hyper Bomb to stop him. He then copies Guts Man's Super Arm, and Dr. Light asks if he needs a recharge, but Mega Man declines.

He then gets teleported into abandoned facility and while Mega Man was think about being more of a fighter against Robots, Roll feels worried about his feeling about him, especally as a peaceful robot. Dr. Light even though that it was against his nature, Roll belives that it was not his faul because of the hacked Robot Masters, and instead, Roll then talks with Mega Man. While fighting with Cut Man with the hyper bombs, Roll tells him that he is not a bad robot but instead is sacrificing everything for everyone. The hyper bombs failed and instead, he uses his Super Arm to pick up a large block and slams Cut Man which destroyed him. He then coppies Cut Man's Rolling Cutter, and he thanks Roll for helping him on his focused.

With three of the six Robot Masters destroyed, Dr. Wily askes Blader Brigade to retrive Cut Man and the other hack Robot Masters to him and hopes that if he wants to stop him, he would instead give Mega Man "the Honor" of being destroyed by Dr. Wily.

At the first panel, Cut Man was cutting off branches as Dr. Wily relaxes with his Lemonade. After that, he cuts off a ribbon during a grand opening of Dr. Wily's Castile. Then, at a barbershop-like scene, he asks Dr. Wily if he can fight Mega Man but Dr. Wily tells him later, and orders him to cut off his hair. He then does Dr. Wily's order and asks the reader to send in fan mail to Archie Comics. 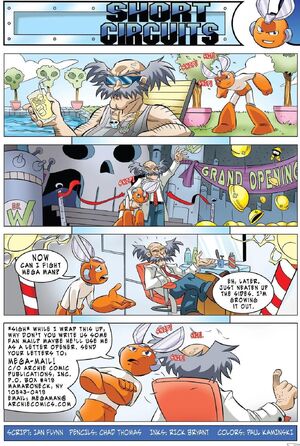 Page 5
Add a photo to this gallery
Mega Man Comics
Retrieved from "https://blue-bomber-comics.fandom.com/wiki/Archie_Mega_Man_Issue_002?oldid=5605"
Community content is available under CC-BY-SA unless otherwise noted.