Archie Mega Man Issue 003, or simply referred to as Mega Man #003 is the third issue in the Mega Man comic series published by Archie Comics. As part three of the Let the Games Begin story arc, Mega Man continues to find the three other Robot Masters causing chaos. The Issue was released on July 6, 2011.

"Let the Games Begin!" Part Three: Dr. Wily is trying to take over the world with his stolen Robot Masters, but he didn't count on Mega Man! The young hero is tearing through the would-be world- conquering robots - but is the power going to his head?

Elec Man was telling Dr. Wily that he'll power up the Robot Master that Dr. Wily sent to him as Mega Man tries to stop him. Although Elec Man gained access to the Power Conducits, he powers it up and electric sparks was going towards him. Mega Man was caught on camera but Mega Man comes into the scene and used his Rolling Cutter to stop Elec Man, also losing the signal with Dr. Wily. Wily then put the recovery robots on stand-by for the two other Robot Masters while he thinks that Mega Man could be a problem to him. He then copies Elec Man's Thunder Beam and then he suddenly gets teleported to a Water treatment plant where Ice Man is located.

Mega Man is trying to get there, Dr. Light is testing some weapon while Roll questions him about how Rock (under the Mega Man name) is different, including with his feelings about fighting towards Robot Masters. Dr. Light doesn't worry about it yet as Mega Man finds Ice Man. As he found him, Ice Man is throwing ice projectiles towards him while Mega Man uses his Thunder Beam to electrocute Ice Man. He then obtains Ice Man's Ice Slasher and then he gets teleported into a factory.

While trying to avoid lava, and other defensive robots that attack him, and then freezes Fire Man and destroys him. He then copies his weapon but he gets sent back to the Lab. He then gets trapped into a transparent cell. Dr. Light fires and using Ice Slasher, he then fires back but it fails to brake the cell. He tries other weapons the Mega Man copied and asks Dr. Light to let Mega Man be out of the cell. Mega Man was about to ask Roll something but she runs away and Rock asks to take the copied weapons because he felt like he was becoming more of an evil robot.

Dr. Light felt that Mega Man is not evil but he is Dr. Light's image and was what gave him a sense a justice. Although Mega Man doesn't understand it, Dr. Light explains that Rock knew about the tasks that he took although Dr. Light continues to him. Mega Man gets his Mega Buster back as he many need that weapon to defeat Dr. Wily but he also gotten a new Beam that Dr. Light had made. Although he feels sorry about it, Dr. Light feels ok about it. He then apologized to Roll for acting like a "jerk" and promises not to do it again, though Roll said that she won't waist her time after cleaning up Rock's tantrums.

Later, Dr. Light then checks him and tune him up and notices not only the copied weapons, but also their movements. Roll was seen picking up a block and then slams it but she apologizes about it. Dr. Light later finds the location where Dr. Wily is located (and also where the Robot Masters were created) although he cannot be teleported there. Before he leaves, Roll tells him to be careful since Dr. Light told him that it is a fortress and it is dangerous, and he recharged Mega Man along with refueling his weapons. Dr. Light also remind him to not let their power use him and later says good Luck to Mega Man.

With Mega Man going towards near Dr. Wily's Castile, he beings to break into the Castle and fight against Dr. Wily. As that happens, he then checks the cameras as the Robot Masters, which they are behind Dr. Wily, are there preparing to destroy Mega Man at will.

Mega Man feels sorry about his lost in control earlier though Roll feels ok about it. She later visualizes having "so much power" with a dirty room and using fire as the "ultimate cleanser." Mega Man doesn't want to think about it and Rolls asks him on what it is supposed to mean. 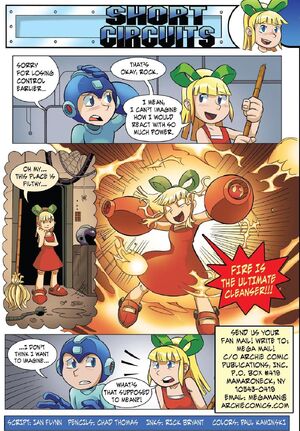 Variant Cover, Raw
Add a photo to this gallery

Page 5
Add a photo to this gallery
Mega Man Comics
Retrieved from "https://blue-bomber-comics.fandom.com/wiki/Archie_Mega_Man_Issue_003?oldid=6869"
Community content is available under CC-BY-SA unless otherwise noted.