Start a Wiki
'Archie Mega Man Issue 004, or simply referred to as Mega Man #004 is the fourth issue in the Mega Man comic series published by Archie Comics. As the fourth and the last part of the Let the Games Begin story arc, Mega Man begins to fight against Dr. Wily however, he has to go through the Robot Masters as they are recovered and powered up to fight against him. The Issue was released on August 10, 2011.

This is it! Mega Man has reached Dr. Wily's stronghold, and now nothing stands between him and the madman! Except the Yellow Devil. And the Copy Robot. And the rebuilt Robot Masters. Good luck, Mega Man! Don't miss the finale to the first arc to this brand new series!

Mega Man was having some flash backs of being in Light Labs and having a friend who would end up taking over the world and becoming what many would call him as Mega Man, although he feels that the promise he has is not easy to keep. He begins to defeat the Yellow Devil and was about to use his Thunder Beam but he instead doesn't want to use it since he dosne't want to frighten Roll. Instead, he uses his Mega Buster to stop him. He hopes to bring some advice but he needs to stop Dr. Wily on his own.

After defeating Yellow Devil, he finds a Teleport chamber which ends up being a trap as all of the Robot Masters that Mega Man defeated in the last two issues. They begin to attack him even though he has all of the weapons that he copied, but he stopped Elec man and questions about Mega Man. He later tells them that Dr. Light built the Robot Masters to help people but instead Dr. Wily hacked them to be used to take over the world, which was a wrong thing in Mega Man's view. Mega Man also tells them to come back to Light's Lab to be reprogrammed but some begain to argue with the reprogramming, some decide to stop the fighting and be reporgrammed while some decide to follow Dr. Wily's orders and instead fight.

The Robot Masters began to fight against other Robot Masters while Mega Man leaves the scene and goes somewhere. He finds some Spikes that are near by and he used the Magnet beam to cross it which Mega Man feels that it was the "coolest weapon ever". He then approaches to a room and the he gets trapped as Dr. Wily copies a Mega Man and the copied Mega Man is begins to fight him. Although they had no match with their Mega Busters, they still have the same abilites including using their own copied weapons which still never works. He still has the Magent Beam which that Mega Man clone never had.

While trying to destroy him, the Robot Masters comes in and later destroyes the Mega Man Clone. Although the real Mega Man though it was him, Elec Man tells him that they were programed to destory the Mega Man clone which was a sucess. He thanks them for their help and hopes that they'll be reporgramed but Dr. Wily comes in out of no where and Mega Man tells the Robot Masters to leave and let him to do the rest. As he uses his Magnet Beam to get higher, Dr. Wily talks about Mega Man's embarrisment and the Robot Masters. While Mega Man attacks his machine using some of his copied weapons, he then tells Dr. Wily about Dr. Light and how much he cares about him and replies on why Dr. Wily could have been embarrised about the major chaos he did towrds the Robot Masters.

Although he tries to fire, it stoped working and Dr. Wily told Mega Man he still can't attack him, however, Mega Man uses his Mega Buster to finish him. With his machine destroyed, Dr. Wily felt that Dr. Light's robot did conqured him. Mega Man picks up Dr. Wily from the debries and asks if he needs medical attention. The Robot Masters comes in and Dr. Wily tells him that they are supposed to destroy Mega Man but they acctually destroy the Mega Man Clone. After exiting out of Dr. Wily's Castle, Mega Man tells Dr. Light that he is safe, he freed the Robot Masters and he captured Dr. Wily. Back at Light Labs, Roll felt happy about Mega Man and Roll begins to get some tools to recharge Mega Man and also reprogram the Robot Masters. While that is happening, Time Man and Oil Man is sneaking apon the Lab as they Activated them for some reason, possbily to re-fulfill Dr. Wily's Promise to take over the world

With Dr. Wily at his cell, Mega Man felt that his first adventure was a great one though Dr. Wily felt it wasn't. Mega Man questions Dr. Light if there is any more adventures that they may face and he replied that there will be one soon. As they walk away, it goes to a Window with Proto Man, Bass, Rush and Treble looking towards them with Bass demanding them that he want to be in the Comics. 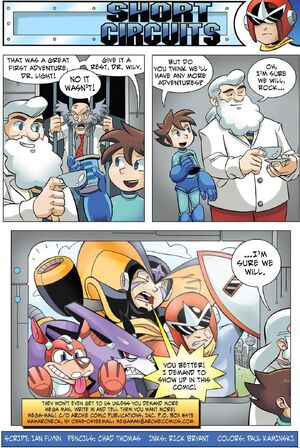 Page 5
Add a photo to this gallery
Mega Man Comics
Retrieved from "https://blue-bomber-comics.fandom.com/wiki/Archie_Mega_Man_Issue_004?oldid=6864"
Community content is available under CC-BY-SA unless otherwise noted.