Archie Mega Man Issue 024 is the twenty fourth issue in the Mega Man comics series published by Archie Comics. This Issue begins the Worlds Collide Story Arc, which was a Cross-Over of the Mega Man and Sonic the Hedgehog Comic Series (along with it's spin-off, Sonic Universe) and at this issue, it discuss about how the plan to create the next Genesis Wave was created and the rise of Robotized Masters to obtain the Chaos Emeralds. This issue was released in April 10, 2013.

"Worlds Collide," Part One. The crossover event of 2013 starts here! The Mega Man/Sonic the Hedgehog epic kicks off with a bang as the Blue Blur and Blue Bomber meet for the first time! And considering how hard they're fighting each other, it might be the last! Why are the heroes trying to take each other down? Drs. Eggman and Wily know, and they're loving every minute of it! You cannot miss this historic first meeting of two of the biggest video game icons in the entire world! Get in on the ground floor with all-new cover art by the legendary Patrick "SPAZ" Spaziante, and choose your favorite hero with the "Team Sonic" and "Team Mega Man" variant covers!

At Green Hill Zone, where the entire story arc begins, Sonic was chasing Mega Man as he was shooting at him with his Mega Buster. Mega Man was wondering about the world that he is which he thinks that it would have been perfect for Quick Man a “run for his money” as he shots towards Sonic. He then sees that attack as “not bad” although Sonic is fast, and he Spin Dashes towards Mega Man. They continue to fight though they both think they cannot be able to take a hit and while that is happening, a Roboticized Master (a Robot Master that was Roboticized from an real flesh, in which this one shown was Tails Man) is looking towards Mega Man and Sonic and if they are watching the video feed.

Drs. Wily and Eggman started to like it as they wanted them to “turn him into scrap” and “exterminate the Rodent” while fighting. Dr. Eggman congratulates Dr. Wily on his plan and replies that it was getting into a better place then he though. The both poured champagne and he checks on the Chaos Emeralds that they currently owned.

Weeks before this ever happened, at Mega Man’s World, Dr. Wily was asking Ra Moon that he wanted a Met with a Rice-Cooker as Flash Man comes in with a Chaos Emerald. He then doesn’t want to use Ra Moon and instead use that Chaos Emerald to do this process. Flash Man noticed using a spectral analysis that what Dr. Light was holding is beryl though he wonders that it’s an Aquamarine or something since he was not a geologist. Ra Moon claimed that it was posed with some kind of power and then Dr. Wily tests it out.

As that happens in Sonic’s World in Mobius, Eggman asks Orbot and Cubot to send out a general holographic signals throughout the empire though and begins to tell them aggressively that he would conquer and take complete control of the world and also find those Chaos Emeralds. However, that message was interrupted when Dr. Wily comes in. He then gets angry about that signal though the person he have seen was an enemy. Wily tells him about him though both claim that they are the greatest Genius in the world in terms of Robotics. Dr. Eggman asks Dr. Wily about the year in his world, which was 20XX and asks and Eggman excused him about that outburst earlier. After he tells to Dr. Wily about him, Dr. Wily asked Dr. Eggman about his world and wonders if he’s an alien though Eggman knows that he’s talking about Alternative Realities. He then tells him that there’s an infinite variation of their worlds in which they’re similar and some are different. Dr. Wily thinks that it could be fascinating though he doesn’t know about how he’s bring a better way of thinking to the world with their machines. Eggman does have something to revert almost everything.

Later on, Eggman and Wily later meet somewhere and Dr. Wily has ideas to make a zone that can change dimensions using the Chaos Emeralds. As they worked on the names, the later on ended up with the name “Skull Egg Zone” and Construction begins as they began to bring in Robot Masters. That Zone would have been built that can bend the rules of space and time and also with Ra Moon thave can create weapons without any barriers on limits or interference. Eggman made the battle stations as Wily have a Flair for internal defenses. After a long time on work, the Skull Egg Zone was completed and after a game of Rock-Paper-Sicsors, Egg Man christen the what it would be the Wily Egg (or the Death Egg III form Eggman's view).

Later on, he takes to the second step. Using a Chaos Emerald, he then created major alterations that rewrite history of their worlds. In addition, they also questions if Sonic Mega Man and others would remember who they are. They pressed the button that would have change almost everything that they've knew. While that was done, they would resurrect all of Dr. Wily's robot masters but Dr. Eggman suggested a better idea.

At Tail's home at Sonic's re-changed World (due to the Genesis Wave), he was packing up for an adventure as he brings in his compass along with food to eat along the way. He then wonders that Sonic's there but as he's almost done for packing but Bass, Dr. Wily's Enforcer, and Metal Sonic comes in and kidnaps him. He then wakes up at the Wily Egg as he was about to be part of Eggman's "Experiment" which they were making an idea of Roboticizing Flesh and turning them into Roboticized Masters. Tails dosen't know what they're talking about and then he get's Roboticized. Durring the process, Tails would have become Tails Man, the first Roboticized Master that both Dr. Wily and Dr. Eggman ever made. Wily thinks that he can fly freely to both of their worlds though he doesn't have any much personality. He then decided to make more of Sonic's friends to be Roboticized Masters and make is more easier to obtain the Chaos Emeralds, which would have been a perfect idea.

At Mega Man's world at the Post-Genesis Wave, Proto Man is looking towards Mega City as he comes in to a robbery at a bank. He then comes into the Bank, breaks the into the safe and notices four other Robotized Masters (which not only included Tails Man but also Knuckles Man who was Kncukles, Rose Woman, which was Amy, and Shadow Man, which it was Shadow) about to rob a chaos emerald. He wonders who they are as they guard and begin to rob the Chaos Emerald.

Mega Man greeted Sonic and replies that he’s a “legend” and teams up with him to defeat their enemies, Dr. Wily and Dr. Eggman. Orbot comes in and tells them that they must Cross over By-Laws and both Mega Man and Sonic have to fight the Robot Masters first though Mega Man feels it won’t be hard. However, both Drs. Wily and Eggman felt that they’ve gotten a few issues with peace. 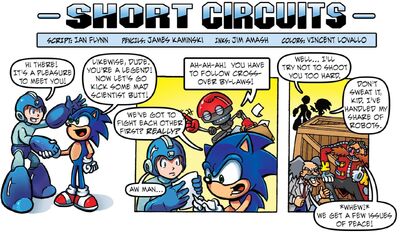 Convention Cover
Add a photo to this gallery