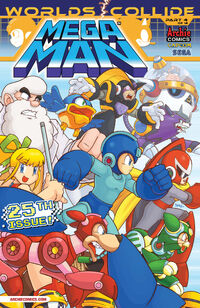 Archie Mega Man Issue 025, or simply refered to as Mega Man Issue #25 is the twenty fourth issue in the Mega Man comics series published by Archie Comics and part four of the Worlds Collide Cross-Over Story Arc and the last part of the Kindred Spirits Sub-Arc. This issue was released in May 8, 2013.

It's Sonic versus Mega Man - Round Two! Celebrate 25 issues of Mega Man with the throwdown brawl to end all throwdown brawls! The Blue Bomber has the home field advantage this time; can Sonic keep up in this unfamiliar city? Meanwhile, Drs. Eggman and Wily make their boldest move yet in their master plan! This milestone issue marks the dramatic conclusion to the first act in the biggest crossover story of 2013! Featuring a stunning gatefold cover by Sonic/Mega Man art legend Patrick Spaziante, and a special "E.F.F. (aka Evil Friends Forever) variant" featuring Drs. Eggman and Wily on a (presumably evil) bicycle built for two!

After beeing sent over to Mega City on Mega Man Worlds, Mega Man, with his robot pets, tells Sonic to surrender while Tails Man continues to record their wereabouts. With Sonic holding a chip that can disable the Mega Buster if removed he later gets another copy of after Eddie was able to make another chip and he later lets his Robot pets to fight against him while he sips a E-Tank. While they fight, Mega Man tries to stop him as Sonic with help from his pets, though they continue to chase him towards a highway. While Mega Man tells Sonic's friends didn't do the stealing of the Chaos Emerald from the bank, Sonic still makes false claims on Mega Man kidnapping one of Sonic's friends.

At the Wily Egg, Both Drs. Eggman and Wily were still angry about having the chat and thinking that both Metal Sonic and the Copy Robot were blamed for the issues they've caused. While they still have one chaos Emerald left, Eggman decides to destroy both Sonic and Mega Man, however, Wily believes that is can clue them quickly despite having Eggman to decide if he want to make a re-group of all of the Robotenized Masters or just fight until they're week. Eventually Dr. Wily orders Tails Man to attack Sonic and Mega Man by bowing them "off the map" and they later starting fighting against them though Sonic though it was Tails at first. After numerous cars where thrown to the air, Sonic saves a trapped woman while Mega Man hold a car and saves the rest. Sonic calls a truce and then fights Tails Man who is continuing to cause damages.

While trying to stop him, Sonic begins making some distractions while Mega Man takes a charged shot to stop him. While Mega Man founds out that Sonic was hunting down Tails Man and others, Mega Man eventually touches Tails Man, though he needs to checks for any "weapon data". This eventually causes Tails Man to become Miles "Tails" Prower and also becoming the first Robotenized Master to be De-Robotenized. Tails talked about who kidnapped and the other things though while Tails talk about about it, he also told about some things that could indicate Bass's appearance.

Tails later knows about the place where he was sent along with the people who was there, with another Doctor that Mega Man would knew as Albert Wily. As begins to discuss about, Sonic and Mega Man were talking about Eggman, Wily, and their Robotized Masters though Mega Man belives that his programming does not allow him to harm life and instead has to stop him as if the Robotenized Master is a "Robot." Despite the issues with their thoughts on both Mega Man and Sonic, Mega Man apologize for the accidental identify though

While they head off to Light Labs, Sonic eventually gets nauseous after being teleported though Mega Man feels sorry about it since it works fine on people. While he is about to introduce someone, smoke comes into the room and following its origin, they noticed Proto Man fighting against Bass with Metal Sonic kidnapping Dr. Light and Auto and Roll taking cover from the Battle. Mega Man along with others tried to stop them but Bass with Dr. Light used the Warp Ring and left before they were able to stop him. The fighting was over and Roll suddenly hugs Mega Man after being worried from the major battles with him though they have a few things go through.

After talking, Roll talked about the Portal Energy which that can allow them to get them to another world, although Tails has some reminds on it. While Mega Man was trying to help with the other things and Sonic Relaxes, Tails finally founds the origins and the Portal gets open. They get ready to go with Proto Man, Mega Man, Rush, Tails and Sonic, they are ready to fight against Eggman and Wily's Robotinized Masters with Roll hoping that they'll be safe. As they get into the Skull Egg Zone Both Mega Man and Sonic gotten an odd feeling about the place while they continue to see if they can stop Dr. Wily and Dr. Eggman before chaos continues to grow on both worlds.

There was a competition on who has the greatest cross-over battle. The first one was Mega Man and Sonic but the audience said no. It later switches to both Mega Man and Sonic Vs. their Enemies, Dr. Wily and Dr. Eggman, respectively, but like the last one, others decline. Beyond that, on a night, it later shows a battle between the "Pirates", Pirate Man and Captain Whisker from the Sonic the Hedgehog comics along with the "Ninjas," Espio and Shadow Man.

Raw Variant Cover (Uncolored)
Add a photo to this gallery