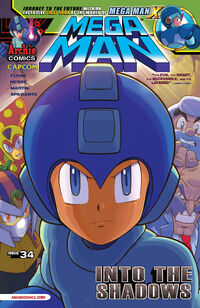 This is it! The issue every Mega-fan has been demanding! The debut of Mega Man X! But first, in 'Shadow of the Moon' Part One: Mega Man joins a research team seeking the truth behind Dr. Wily and Ra Moon. But how far will they get when Shadow Man goes on the attack? Then, in 'The X Factor' Part One: jump 100 years into the future as Dr. Cain discovers Dr. Light's final, greatest creation — Mega Man X! Featuring pencils by the returning Mega Man art legend Patrick 'Spaz' Spaziante! The road to the next big mega-crossover starts here, featuring an exclusive Mega Man X variant cover by superstar artist Ben Bates!

At the Amazon Jungle, nearby the Lanfront Ruins on the planet Earth, Rock "Mega Man" Light is suddenly ambushed by two spiked pillars that could ultimately crush him. The Blue Bomber is able to avoid the pillars, and he begins to shoot at the pillars, destroying them. Pharaoh Man then arrives to calm Mega Man down, as the former mentions that the artifact is now destroyed. Despite Mega Man telling the Robot Master that the pillars were a trap, Pharaoh Man reminds Rock that he is supposed to lead the expedition, as Mega Man has already done his fair share with this area. Behind the two robots include Dr. Thomas Light, Roll Light, their robotic-dog Rush, Dr. Mikhail Cossack, Dr. Pedro Astil, and his Robot Master Plant Man. Roll and Rush try to calm Mega Man after his near-death, but the Blue Bomber tells his sister that he's all right and that he was surprised. Dr. Astil, however, tells Mega Man everything is okay and that he is just as scared as Mega Man is. Rock tells Astil that he was rebuilt and that he's fine, but Astil comments that he survived his encounter with the temple, but the emotional scars are still present to him. Plant Man asks his creator if [Astil] should be here, but Astil declines, as he needs closure from this place. Dr. Cossack also mentions that it would be nice to bury Dr. Albert Wily's "ludicrous" claims. Dr. Light questions Dr. Cossack if he believes Dr. Wily is innocent, but Dr. Cossack bluntly tells Dr. Light that he has never trusted Wily, and the Russian scientist asks why Dr. Light keeps helping Wily despite what he's does to Dr. Light. Light then states that everyone deserves another chance, and he's willing to help Wily see the worse of his ways and give up his evil ambitions. Dr. Cossack then decides to get this search over with, and Rock and Roll follow along, but Rock is sensing the fact that he might be watched.

Unbeknownst to Rock, Break "Blues Light" Man along with the seven Ra Moon Robot Masters–Magnet Man, Snake Man, Gemini Man, Hard Man, Top Man, Spark Man, and Needle Man–are spying on the expedition team via Search Snake courtesy of Snake Man. Snake Man fills in to Break Man who is with the Light family on the expedition. Break Man, ecstatic that Roll is safe after an accident, asks Snake Man if their target, that being Shadow Man, has been sighted. Snake Man declines, stating that Shadow Man is indeed elusive. Break Man then tells the Robot Masters that their targets is not Mega Man's party, but that they must find Shadow Man quickly, as the Robot Master is quite dangerous. Outside the Temple of the Moon, Dr. Light conforms Rock, telling his son that he doesn't need to be here, but Rock refuses to leave the others, as Dr. Wily saved his life, and now he must fulfill his promise to Wily earlier that he will prove Wily innocent. Dr. Light understands, and the expedition team heads inside the temple. However, Shadow Man is spying on the expedition team, and he assumes that they are here to disrespect his master's grave. Shadow Man then runs towards the heroes with his Shadow Blade, preparing to kill the team. Suddenly, Break Man teleports to Shadow Man's location and quickly hits the Robot Master towards a wall right before Rock turns around and notices the noise. Thinking it's just himself, Rock continues to walk with the expedition team.

Break Man contacts Magnet Man and asks him if he has found his coordinates. Suddenly, a Magnet Missile launches from Magnet Man's arm and grabs Shadow Man. Pulling Shadow Man to Snake Man's and Magnet Man's location, Shadow Man begins to fight back against the two Robot Masters. Spark Man uses his Spark Shock Master Weapon to catch Shadow Man off-guard. This gives Hard Man the chance to slam himself on Shadow Man. Hard Man barely misses, and Shadow Man begins to run away. However, Gemini Man, splitting himself into two, encounters Shadow Man, stopping the Robot Master just enough time for Top Man to perform a Top Spin move on Shadow Man, the latter's weakness. Hard Man then launches himself upward and slams himself of Shadow Man, as the Ra Moon Robot Masters have officially subdued Shadow Man. Shadow Man, seeing how he was easily defeated by the Robot Masters, forces Break Man to shoot him, as not only has his master been destroyed, but he has no purpose in life anymore.

Meanwhile, inside the Temple of the Moon, Pharaoh Man tracks down traps below the temple floor, while Plant Man tries to make the temple more "friendly" to his eyes. Dr. Light tries to conform a worried-Dr. Astil, but Roll decides to help Astil via letting him hold her hand. Mega Man wishes that Quake Woman was here to help search the tunnel faster. Dr. Cossack agrees, as he plans on making a certain Robot Master that is made for drilling. Suddenly, Pharaoh Man and Plant Man approach an opening that ends the tunnel, which is the chamber of Ra Moon. Dr. Light tells Mega Man that he has EMP-resistant coating on just in case Ra Moon is still alive. Mega Man, Pharaoh Man, and Plant Man then prepare to go inside the chamber. Meanwhile, across the world, Dr. Noele LaLinde tells her robotic-daughter Tempo "Quake Woman" LaLinde to come inside after bringing the rest of the samples out of the truck. Suddenly, Break Man surprises Quake Woman, and he asks what it means to call someone family...

In the year 21XX, specifically on April 8th, Dr. Cain is on an archeological expedition with two Ball De Voux robots providing scans underneath the ground. His current quest of searching remains that will prove his findings. However, he decides to move his site to another location, hoping to find better luck. On April 9th, Dr. Cain located metallic remains beneath his site. The following day (April 10th), Dr. Cain had found the remains of Dr. Thomas Light's laboratory. Cain had found notes that keep referring to "The Capsule." Eventually on April 13th, Dr. Cain had found the capsule underneath a collapsed ceiling. The capsule suddenly transmits a hologram of Dr. Light, explaining that inside the capsule, Mega Man X–a robot with the ability of human emotions and free will– is inside. However, as Dr. Light had feared that X would be too advanced of his kind to co-exist with mankind, X was sealed inside a capsule for thirty years. Unfortunately, Dr. Light will not live long enough to see this day, nor does he have an apprentice to continue his work. Dr. Light ends the message with X was sealed on September 18th, 20XX. Dr. Cain realizes that it has been longer than thirty years, but he debates on opening the capsule, seeing the robot might not even work. However, on April 14th, 21XX, Dr. Cain releases Mega Man X from his capsule.

Impressed at Light's final creation, Dr. Cain then decides to take supplies from Dr. Light's laboratory as well as X to his own laboratory. And eventually, on November 22nd, Dr. Cain, along with the assistance of X, had created the first reploid–a replicated android with the ability to think and feel like humans. Dr. Cain admits that while he didn't quite understand some of programming used to make X from Dr. Light, Cain improvised on several parts, and the reploid seemed to work fine. In fact, Dr. Cain and the reploid got into their first argument on the same day, leaving Dr. Cain very intrigued. By January 3rd, 21XX, reploids are being mass produced by the hundreds and the human society seems to mind the reploids co-existing with the humans. X, however, remembers that Dr. Light mentioned that it might take decades for reploids and humans to happily co-exist together. X then wonders if maybe, just maybe, they are moving too fast for their own good.

This issue's Short Circuits begins with both Mega Man X and his partner Zero making themselves at home at Light Labs, as both have finally made it into comic format. However, both Mega Man and Roll try to push X and Zero away, as Mega Man mentions that the comic hasn't even reached the adaption of Mega Man 3 yet, and that X and Zero should get their own book instead. 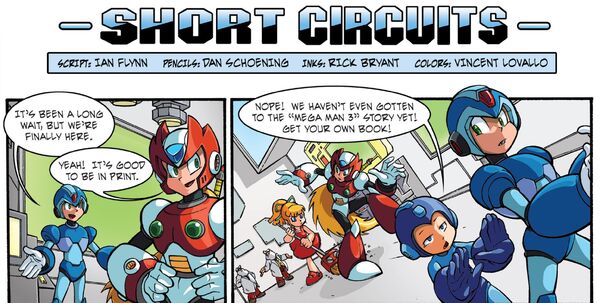 Page One, Shadow of Ra Moon - Part One

Page One, The X-Factor - Part One

Page Two, The X-Factor - Part One
Add a photo to this gallery

Pre-Final Page Two of The X-Factor - Part One, colored.

Pre-Final Page Two of The X-Factor - Part One, uncolored.

Pre-Final Page Three of The X-Factor - Part One, colored.

Pre-Final Page Three of The X-Factor - Part One, uncolored.
Add a photo to this gallery