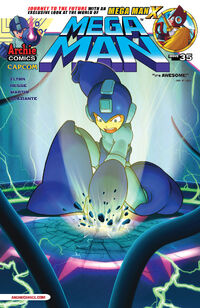 The world of MEGA MAN X returns! Blast from the deadly jungle to the ferocious future in the Mega Man issue everyone is talking about! 'Shadow of the Moon' Part Two: Mega Man leads his fellow robots into the mysterious ruins of the Temple of the Moon. What horrors will they uncover hidden in the shadows? MEANWHILE, halfway around the world, Break Man finally confronts Tempo! Then, in 'The X Factor' Part Two — Maverick incidents are on the rise! Dr. Cain organizes the Hunters, but will X stand for their violent ways? Find out in this stunning story featuring all new cover and interior art by PATRICK 'SPAZ' SPAZIANTE and a sweet MEGA MAN X variant from BEN BATES!

In the year 21XX, at the city of Arcadia, people and reploids–robots built with the ability of feeling and thinking like humans–have co-existed with each other in harmony thus far, as typical reploids are at work, protecting or helping humans. Mega Man X discusses with Doctor Cain via laptop about the recent activity of irregular activity from the reploids, being dubbed as "maverick." X asks Dr. Cain what a maverick is, and the doctor replies by saying that it is when a reploid apparently goes feral and begins to attack whatever is in its path. As a more recent maverick sighting occurred nearly an hour ago, X understands what mavericks are, but he cares to know if the reploid from this recent attack survived. Unfortunately, to X's dismay, the reploid did not. X wants to learn more about the incident, but Dr. Cain tells X that he must leave to a council meeting at the Arcadia Council Chamber to discuss about these maverick incidents. And so, at the Arcadia Council Chamber, the Arcadia Council argue with Dr. Cain about the continuation of the reploids despite the recent maverick incidents. As Dr. Cain mentions that only three incidents of these maverick sightings have occurred, the council believes that it is far too many for reploids to still be produced with this malfunction. Dr. Cain then states that programming errors or bugs and glitches in the personality coding could be causing the irregular activity, but since the reploids are far too new to explore, no one will have the answer just yet. The council suggests to discontinue the production of the reploids in order to investigate, but Dr. Cain, not wanting Dr. Light's dream of humans co-existing with robots to end, brings up a new idea.

And thus, months later, the Maverick Hunters were formed. Led by Sigma (who has the most advanced coding system of any reploid created), a unit of Maverick Hunters–Vile, Spark Mandrill, Flame Stag, Boomer Kuwanger, and Gravity Beetle–had approached an abandoned facility, where a maverick spotting has been confirmed. Sigma had went inside to deal with the situation, in which a robot named Zero had went feral and began attacking Sigma. Apparently, Sigma was successful at defeating Zero, but with a cost; Sigma had received a purple scar per eye. Later, X had approached Sigma at a street, where he and other Maverick Hunters are arresting maverick reploids. Sigma asks X if he's ready to join the Maverick Hunters, but X declines, as he believes killing mavericks isn't the right thing to do. Sigma then admits to X that he was fond of X's capabilities of thinking and feeling more emotionally than other reploids, something that makes X remarkable to Sigma's eyes. Sigma then tells X that if someone where to find everlasting peace on the planet, it would be X. But, until then, Sigma will keep the city safe.

X asks Mega Man if there something wrong and replies that it was Dr. Wily, which is a person that X doesn't know since he was not at Mega Man's time. Mega Man then talks about his arch-nemesis, Dr. Wily, in which in his views made "Killer" Robot Masters, and has been in the past hack and stole Robot Masters from Light Labs, and he clams that Dr. Wily is "The Worst." X asks Mega Man if he wants to trade with Sigma but Mega Man Declines. 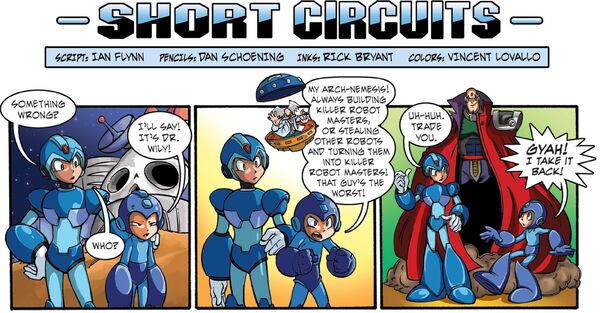 Page One, The X-Factor - Part Two

Page Two, The X-Factor - Part Two
Add a photo to this gallery