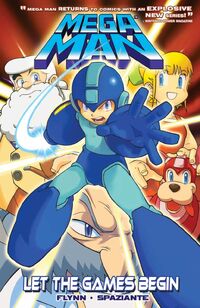 Mega Man Volume 1: Let the Games Begin is the first volume of the Mega Man comic series trade-paperbacks series published by Archie Comics. The volume consists of Mega Man Issues #001-004 which is where the Let the Games Being saga takes place. It was released on September 9, 2011.

Dr. Light wanted to build a better tomorrow with his new Robot Masters, but the evil Dr. Wily reprogrammed them to take over the world! Contains issue #1-4 plus EXTRA material!

The cover for Volume 1 is the same cover from Mega Man #001 but with one notible difference, Roll has her pre-MM8 look on the Volume 1 cover as opposed to the MM8 style she had in the cover for issue #001