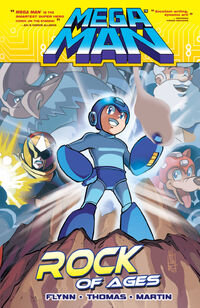 Mega Man Volume 5: Rock of Ages is the fifth volume of the Mega Man comic series trade-paperbacks series published by Archie Comics. The volume consists of Proto-Type story arc from Mega Man Issues #17 and #18 along with Issues #19 and #20. It was released on May 15, 2014

Celebrate 25 years of Mega Man with the exciting next chapter in the Mega Man mythology in graphic novel! By popular demand, this latest volume introduces the saga of Blues, aka PROTO MAN! Who is this mysterious robot, and what special connection does he share with Mega Man? Fun, action, adventure and more in this collection! Collects issues #17-20.