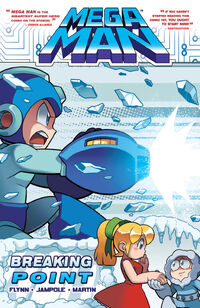 Mega Man Volume 6: Breaking Point is the sixth volume of the Mega Man comic series trade-paperbacks series published by Archie Comics. The volume consists of Mega Man Issues #21-23 and #28 (with the exception of Issues #24-27 as they were released separately and was part of the Worlds Collide story arc). It was released on January 22, 2014

The 25th anniversary celebration of Mega Man continues with the exciting next chapter in the Mega Man mythology! And this latest graphic novel volume is a cause for celebration indeed -- there are parties, love, and... revenge?! From a New Year's terror attack by the vengeful Emerald Spears, to a devastating showdown with the mysterious Break Man, Mega Man just can't catch a break! This volume also ties-into the biggest comic book crossover event of the year: SONIC/MEGA MAN: WORLDS COLLIDE! See how Mega Man's world was rocked by Dr. Eggman and Dr. Wily's evil schemes! Witness the startling aftermath of the crossover as the mysterious RA MOON begins its bid for world domination! It's mega-madness, and with our heroic blue hero stretched so thin, there's only so much evil a bot can take before he reaches his BREAKING POINT! Featuring art from Harvey Award-nominated penciller Ryan Jampole.